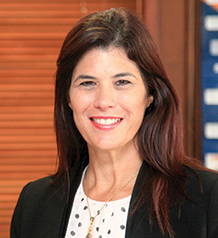 Natalia Abello Vives earned a Bachelor’s of Law from the Pontificia Javeriana University of Bogota Colombia with specializations in Management, Public Service, Business, and Company Law; and Negotiation and Conflict Management and Resolution from Los Andes, Javeriana and Externado Universities; a well as undertaking Management Studies at Harvard University and Yale University. From 2012 to 2014, she served as General Secretary of the District of Barranquilla where she structured and led projects considered to be pillars of the Development Plan of the city. Furthermore, she was a permanent member of the Board or Directors of Triple A S.A. E.S.P., and CEEC convention and Exposition Center of the Caribbean.

Infrastructural improvement in Colombia is underway, with multiple investments in tendered highways and construction of dual carriageways. These include over 7,000km of tunnels and viaducts, on national, secondary and tertiary network roads across the country, and the recovery and improvement of the railway network. In ports, we have invested over $1.2 billion between 2010 and 2014, with an increase of 25% in the level of investment. In recovering the navigability of the Magdalena River we invested COP2.5 billion, and in terms of airports, we began the modernization and expansion of the main terminals in the country, with an estimated COP2.8 billion of investment, involving 39 airports in 19 cities in the country. Without doubt, projects in road and transport infrastructure have stimulated economic growth and will continue do so. We will improve the quality of life of Colombians with over COP40 billion, generating about 310,000 jobs. We have sought to consolidate the national road network through greater connectivity between the centers of production and consumption in the major cities, port areas, and borders with shorter travel times and operating costs.

What are the main projects developed last year and how will these help boost growth, competitiveness, and social welfare?

The national government has launched the 4G program. In the first wave, 10 projects have been awarded for approximately 1,200km, with an investment of COP11.5 billion, which will generate about 57,000 direct jobs in the construction phase. In the second wave nine projects will be up for bidding spanning about 1,740km. In the third wave, projects will be available for about 1,700km. Five of our PPPs projects have been awarded, while others have already submitted feasibility studies, for approximately 3,400km. We have also tendered approximately 1,500km of railways. Regarding ports, to date, the Regional Autonomous Corporation of Rio Grande de la Magdalena (CORMAGDALENA) manages 16 river port concessions and 27 maritime port concessions. The government, through the National Roads Institute (INVIAS), undertakes construction, maintenance, rehabilitation and operations on national, secondary, and tertiary network roads in the country. In addition, we define the strategic logistics corridors to facilitate trade exchange and development in general, as well as the investment needs in roads, river routes, rail networks, and airports, in order to have a comprehensive joint transport infrastructure. The project to restore the navigability of the Magdalena River will generate 1,350 direct and indirect jobs. This investment will decrease operating expenses for freight transport, increase freight revenue growth and mitigate environmental effects.

What are the main challenges Colombia faces to adequately implement transport infrastructure?

Colombia’s difficult climate mountainous topography present real engineering challenges. Colombia is a country of diverse characteristics that make it unique in the Americas: from its coasts on both oceans, to being the only country in South America with three branches of the Andes. These peculiarities have led to a situation in which road and railway transport is complex due to the steep slopes and the presence of unstable ground which, combined with high rainfall over long periods of the year, makes transit through the roads very vulnerable. Thus, the need for greater technical requirements and higher investment costs in infrastructure construction.