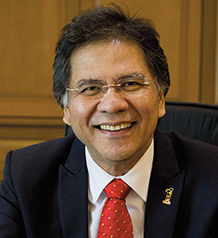 Dato’ Sri Idris Jala was recently featured in Bloomberg Markets’ 50 Most Influential List of individuals who have moved markets or shaped ideas and policies. He was a member of the World Economic Forum’s Global Agenda Council on New Growth Models and the World Bank’s Panel of Advisory Experts for Competitive Industries practice division. He served five years as minister in the Prime Minister’s Office and is currently the CEO of the Performance Management and Delivery Unit (PEMANDU). Previously, he spent 23 years working for Shell in various capacities, based in Malaysia, the UK, the Netherlands, and Sri Lanka. He led a successful turnaround of Malaysia Airlines when he was the CEO.

Share on:
TBY talks to Dato' Sri Idris Jala, Minister in the Prime Minister's Department, Malaysia, & CEO of PEMANDU, on working to support the Tanzanian government in its transformation program and the evolution of bilateral relations.

Can you elaborate on your cooperation with the Tanzanian government and the World Bank on your projects here?

Since 2012 we have supported the government of Tanzania in translating its Tanzanian Development Vision 2025 from high-level vision statements into granular, implementable programs. Our cooperation is a government-to-government program initiated by former President Kikwete after he observed Malaysia’s National Transformation Program (NTP) in action. The Malaysian government agreed to provide the human resources over a period of five years to assist in the development of Tanzania’s own systems and human capital. However, the funds to compensate the Malaysian government for the expenses incurred were provided to the government of Tanzania by the UK’s Department for International Development (DFID), USAID, the World Bank, and the Swedish government. PEMANDU does not work directly with any of these agencies. We support the Tanzanian government solely. The interests of these various agencies may be reflected in some aspects of TDV2025, but we view those as Tanzanian priorities, and not of the World Bank or any other development partner. Ownership of programs must also be, and be seen to be, vested in the local government.

PEMANDU has an office in Tanzania, emulating its work and success in Malaysia. What are the key common factors and differences between the implementation of a transformation agenda between Tanzania and Malaysia?

We do not actually have an office there; the Tanzanian Development Vision 2025 program is entirely managed by the Tanzanian government, and we have seconded a team of Malaysians to work with it, at its request, to supplement its human capital base. Tanzania is quite dependent on the largesse of foreign development partners with its Overseas Development Aid (ODA). Its systems and structures are geared very much toward this model whereas Malaysia is quite free from this constraint. In Tanzania, the ability and readiness of the public and private sectors to work together in the national interest is not really there in any meaningful fashion. However, there is a growing willingness to embark on PPP initiatives to enable government funds to be freed up for social sectors. Malaysia will also help to develop this crucial expertise. With that being said, I believe Malaysia and Tanzania have a great deal in common.

What are the key strengths of the Tanzanian economy, and what needs to be done to unlock its full potential?

In my personal opinion, Tanzania’s latent wealth may be one of the highest around. It is incredibly rich in mineral resources, including now newly proven natural gas fields. It has hitherto not benefited from domestic value addition of these mineral resources, but that is something that is bound to change. The country is strategically located as a logistics hub because of its many seaports that are able to serve its landlocked neighbors. Its tourism resources are hugely underexploited due to poor connectivity and lack of proper marketing. It has large swathes of arable land and a large labor force that has not been fully tapped. When the government takes concrete and determined actions to address these deficiencies, the economy will take off.

How do you envision Tanzanian-Malaysian relations evolving over time? Where do you see room for increased economic activity between the two nations?

The examples I shared of Tanzania’s potential wealth—minerals, agriculture, tourism, and so on—were all the same sectors that provided the initial boost for Malaysia’s own economic development. Our stories have the same beginning. It should follow that the next chapters will also be similar if we share our transitional experiences. Therefore, I foresee Malaysia and Tanzania continuing to leverage on each other in a win-win partnership through their journey from low-income, commodities-based economies to middle-income, manufacturing-based economies. The key to unlocking this potential will be for Tanzania to be able to clearly communicate its focus and priorities to assist the business community to assess risk versus potential in a transparent manner.