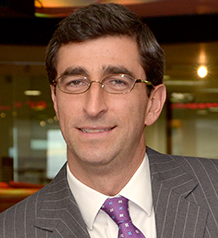 Value in the Bag

Juan Pablo Córdoba holds MA and PhD degrees in economics from the University of Pennsylvania. In his professional career he has worked for the Inter-American Development Bank, the Ministry of Finance and Public Credit of the Republic of Colombia, the IMF, and the Deposit Insurance Corporation of Colombia (FOGAFIN). He is the current President of the Colombian Stock Exchange.

Share on:
TBY talks to Juan Pablo Córdoba, President of the Colombian Stock Exchange, on the rise in market indices, the outlook for securities in 2016, and the significance of MILA.

The COLCAP index experienced a sharp rise in 1H2016. What factors drove this nearly 30% increase?

The 2016 balance of the year has been positive; we have had 15% growth in prices and have virtually erased the losses from 2015. The exchange has also recovered liquidity, with growth of 25 or 30% in volume compared to the last quarter of 2015. Several factors contributed to this performance. Institutional, foreign, and local investors have resumed their positions. They have also boosted purchases after the government’s announcement that it would adopt measures to improve tax conditions for investments in Colombia, which has raised the desire to take positions in companies that are traded on our stock exchange. In addition, there were some companies that were heavily hit in their prices by external factors. However, they continued to generate value and profits, and these were companies with low prices compared to their fundamentals, generating good entry opportunities.

What is the outlook for investments in securities in Colombia for 2016?

We have seen institutional, natural, and foreigner investors increasing their positions. Furthermore, the government of Colombia has committed to approve a tax reform that balances and encourages businesses that are generating employment and economic growth. Markets are waiting for these changes and recognizing that the country has always implemented the right economic measures, which gives more comfort to investors. Furthermore, in a joint effort with the government, suggestions are being taken from the industry and the government announced measures aimed at improving market liquidity as well as increasing business in the trading screens. Investments in Colombia ultimately reflect international and local conditions. Outside of the country, the sentiment toward emerging economies has recovered and the tax scenario shows much anticipated rate increases. There will be movements in the range of portfolios, but we do not foresee a major setback for the market.

What new companies do you plan to list in 2016?

How do you foresee the expected increase in the Federal Reserve rates affecting the Colombian Stock Exchange?

What we have seen is that nervousness leads to investment decisions being taken with utmost caution, and it is undeniable that decisions of the Federal Reserve move markets worldwide; however, we are convinced that the speed of these changes should not greatly affect Colombia provided we aim to lower dependence on external factors. Colombia absorbed the new oil prices well, and must now focus on productivity.

How significant is the Integrated Latin American Market (MILA) for the Colombian Stock Exchange?

MILA has demonstrated itself as a driving force for our economies. In these five years, the MILA has been the driving force of business between Chile, Peru, Mexico, and Colombia. We now have a broader and more diversified investment pool with new opportunities in assets through a local brokerage house. In addition, MILA broadened the vision of our countries and made the governments think of a deeper financial integration beyond the market, allowing flows of savings and investment in transit within an enlarged border as is being created by the Pacific Alliance. We are moving in that direction, regulators are accompanying the initiative, and we will soon be in discussions regarding an integrated regional market. Today, MILA is the largest market in the region, both in terms of the number of issuers and market capitalization. At the end of April 2016, a total of 711 issuers were participating in MILA, while the market capitalization reached $861 billion.