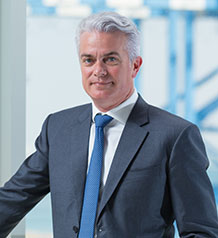 Martijn Van de Linde was appointed CEO of Abu Dhabi Terminals in 2010. He has over 17 years of international port management experience. Before joining ADT, he was Chief CEO of the Port of Salalah, Oman, held the post of Vice President of Global Operations, APM Terminals, and was Terminal Manager for the Port of Tanjung Pelepas, Malaysia.

Share on:
"Whether from here to Kuwait, or India or Bahrain, the UAE is still the hub that most shipping lines and traders choose."

How has Abu Dhabi Terminals facilitated growth in the Emirate’s maritime sector?

We expect YoY growth to come in at roughly 35% for 2015 over 2014. That means that we are going to handle around 1.5 million containers in 2015. On top of that, we are looking at 10-11% growth for 2016 in terms of our forecast. The Abu Dhabi export business is the most important segment for us, along with transshipment. Those two segments really drive the bulk of our growth. On the imports side, growth is much more moderate, as it is related to GDP and government spending. Therefore, we are looking at fairly normal growth percentages of 3-5%. The major industries for us on the export side are steel, aluminum, polymers, and also food processing and agriculture. All of these activities have been invested in a great deal over the last couple of decades. The authorities have been ramping up capacity and producing a lot on the commodities side. Most of this goes out through Khalifa Port and drives our growth. We have also been expanding the transshipment business, moving cargo for other ports in the region. Whether that be from here to Kuwait, or India or Bahrain, the UAE is still the hub that most shipping lines and traders choose within the Gulf area.

Can you tell us more about your relationship with the pivotal government-linked companies that you work with here in Kizad, and how you are facilitating trade for them?

We take a direct approach and spend considerable time and effort on building market intelligence via door knocking, data from ship manifests, stowage plans, and so forth. We use all the information we collect to map out the markets and the origins and destinations for all the companies that are importing and exporting in Abu Dhabi and the surrounding markets. Then, we talk directly to those companies to find out what they need. We look at whether we have all their business, and if not what we have to do to get it. We use that same approach from the small companies up to the large government accounts. Obviously, we cannot talk to them all at once as we have 10,000-15,000 trade customers at the port ranging from sole operators importing two containers up to companies doing 200,000. Once we figure out what the customers need in terms of service and coverage we try to translate that into a network that we can provide. We map that network up and match it to the shipping lines’ networks. This way, we can accurately measure whether we are servicing the economy and the trade satisfactorily. It also allows us to identify opportunities that we would not otherwise know about, such as the packing plant, which is not an obvious activity to do at a container terminal. There is a trend, especially with the major industrial accounts, wanting to go back to the basics of what they do, such as creating aluminum or polymers. They do not want to deal with transport, storage, inventory management, ordering, and packing. This is an opportunity for us to integrate and capture more value out of those industries than we otherwise would. It is becoming more of a differentiator for us as well because most ports do not go this far. They usually stop at services to ships, i.e. getting the containers in and out. We go much further than that and it is becoming our edge.

What can we expect in 2016 from Abu Dhabi Terminals in terms of expansion, development, and major names coming in?

At the moment, there are 45 different companies setting up at Kizad. That industrial zone will continue to grow, it just takes time to build and get all the permits in place. Brazil Foods (BRF) is celebrating its first anniversary at Kizad, and once companies are there and it starts developing, the integration will really begin to work. The companies there typically look at supplying the UAE market, then add more capacity and go into the Gulf market. We are adding the final stage of Phase I in 4Q2016-1Q2017. We will be getting another three automated stacking ship-to-shore (STS) cranes from China, because we are starting to become full in terms of the footprint we have. In 2016, we are going to be 85% utilized, which is a lot for most ports. Then, we will go into Phase II, which is the full build of the man-made port island. We expect to start investing in that in 2018. By that time, we will be up to over 2 million TEUs and there is a lead time of about 18 months from investment to commissioning. Then, we will have another 2.5 million TEU capacity to grow with. We have been enjoying a fantastic growth profile over the last five years. The container volume in Abu Dhabi grew from 500,000 to 1.5 million TEUs in four years. We will have another one or two years with double-digit growth, and then it will moderate after 2017. There are a number of wild cards at the moment with low oil prices and budget deficits in the Gulf states, which is relevant for everyone. Having said that, the UAE and Saudi Arabia have more stamina than some of the other countries when it comes to cash reserves. No doubt there will be pressure on government spending, and that will slow activity down somewhat, or at least make the growth profile more moderate.