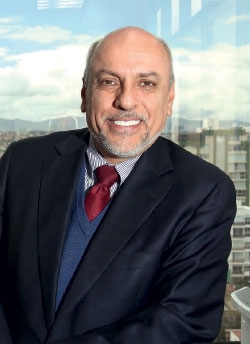 Enrique Cabrero Mendoza got his PhD in Management Sciences at L’École des Hautes Études Commerciales in France (2001), a Master in Pedagogical Improvement at the Centre d´Enseignement Supérieur des Affairs, and a MA in Public Administration at the Center for Economic Research and Teaching (CIDE), and a BA in Administration at the Autonomous University of San Luis Potosí­, his native city. He is the author and editor of twenty books and over a hundred articles and book chapters on issues of decentralization, public policies, local governments, and policies in Mexico and various countries, the founder of the Public Management Journal, edited at CIDE, and of the Government and Local Management Award granted annually as well by CIDE since 2000. He has received several awards and distinctions, such as being named Knight in the Order of the Academic Palms, distinction of the National Education Ministry of France; he is member of the Mexican Academy of Sciences, member of the Directive Board of the Woodrow Wilson Center, among others, and has been consultant to various international institutions such as the Organization of Economic Cooperation and Development, World Bank, and the United Nations Development Program.

Share on:
What are the strategic priorities of the Special Science, Technology, and Innovation Program 2014-2018 (PECITI)? The PECITI has five objectives. The first of them is to gradually raise the monetary […]

What are the strategic priorities of the Special Science, Technology, and Innovation Program 2014-2018 (PECITI)?

The PECITI has five objectives. The first of them is to gradually raise the monetary resources for R&D until they reach 1% of GDP. There is empirical evidence that demonstrates that the countries that invest at least 1% of their GDP on R&D have achieved better economic performance and social welfare. The second objective is to contribute to the investment on human capital. The third goal is to promote the development of the vocations and capabilities of local STI, to strengthen sustainable and inclusive regional development. The fourth purpose is to promote the generation and utilization of knowledge, connecting Higher Education Institutions and Public Research Centers with enterprises. Finally, the fifth objective is to strengthen the scientific and technological infrastructure of Mexico. The economic resources assigned for infrastructure have increased an average of 115% per year during the last two years.

How has investment in science and technology evolved in Mexico over recent years? How do you expect this amount to evolve in the next decade?

On the present administration, the support given to science and technology during the first two years has had an unprecedented increase, 28% more compared to the support given in 2012. Nowadays, the main investor of the “Gross Domestic Expenditure on R&D (GERD)” is the government, with 66% of the total. I will expect that this public funding along with the implementation of consistent public policies, as well as direct and indirect incentives to the enterprises causes a leverage effect on sector activity. This will favor the interest and commitment of the entrepreneurs to invest in these subjects. The idea is that within 10 years, the actual investment at least triples and the value of the indicator GERD/GDP grows to 1.6% so the corporate sector becomes the main investor, reversing the actual tendency.

What are your strategies to mobilize investments and funds towards the R&D (research and development) in science and technology?

The Science and Technology Law considers the creation of trust funds to promote scientific research and experimental development. The strategy to mobilize investments towards scientific research and experimental development is done mainly through the Sectoral Funds, Mixed Funds and the Institutional Fund of Regional Promotion to Scientific and Technological Development and Innovation (FORDECYT). The Sectoral Funds were created with the purpose of handling the requests of the different branches of the Federal Government and of the states. Nowadays, there are 22 active sectoral funds with an equal number of government branches, their characteristic is that for every peso (MXN) that the branch or state gives to the trust fund, Conacyt gives an equal amount. The Mixed Funds are an instrument that supports technological and scientific development in the states and municipalities, through a trust fund formed with monetary contributions from the state or municipality along with the Federal Government through the Conacyt. We also have the FORDECYT to promote the technological and scientific progress, to educate highly qualified human resources, to support the establishment of scientific and technological ecosystems and to increase the regional and state STI investment based on its economic vocations and local capabilities that are in favor of the development of the states. In order to improve the functioning of the fund, actions that lead to scientific and technological activities of high impact and high strategic value were implemented in various regions of the country.

Conacyt supports students to continue their PhD and Masters studies and manages the Sistema Nacional de Investigadores (SNI), how would you describe the interest of the Mexican population on the study of natural sciences?

Engineering and the study of Natural Sciences are by tradition, two of the areas of science that attract more people in Mexico. In the past seven years, 45% of the members of the SNI conducted research in several disciplines such as Biology, Chemistry, Physics, Mathematics, and Earth Sciences. In addition, the average growth of the SNI members specialized on Natural Sciences was 6.7% from 2007 up until now. This number shows the dynamics of research in this area.