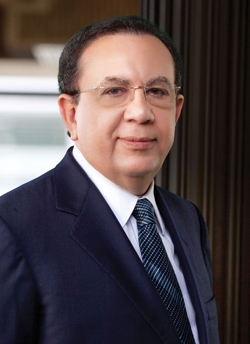 Governor, the Central Bank of the Dominican Republic (BCRD)

Héctor Valdez Albizú was born in 1947 and graduated in Economics in 1971 from the Autonomous University of Santo Domingo. He began his career at the Central Bank of the Dominican Republic (BCRD) in 1970 as a Technical Assistant in the Economic Research Department. Having risen through the ranks, he first became Governor in 1994. He was reconfirmed in that office in August 1996 by the then President Leonel Fernandez Reyna, and appointed Cabinet Minister, occupying that position until August 16, 2000. Again, on August 16, 2004, President Reyna, appointed him Governor of the BCRD. He was reconfirmed in the role in 2006, 2008, and 2010, and again in August 2012 by the new President, Danilo Medina.

Share on:
"The Central Bank’s policies to encourage investment are aimed at ensuring macroeconomic stability."

FDI in the Dominican Republic has increased exponentially over the last decade. What factors drove that expansion and what are the sectors with the greatest potential?

FDI stock, over the last decade, went from $7.684 billion in 2004 to $26.5 billion at the end of 2013, an increase of $18.9 billion, or 245.5%, in 10 years. This significant increase represents an average annual flow of around $2 billion. The main factors that have influenced this increase in FDI are the country’s macroeconomic stability characterized by sustained economic growth, low inflation, and relative stability in the exchange rate and a healthy financial, liquid, solvent, and well-capitalized system. The FDI Act provides facilities and guarantees to foreign investors that are equal to those of Dominicans, which provides legal security with clear rules and regulations with incentives for investors in different sectors. In addition, we have political stability and social peace, marked by a rule of law that prevails in free enterprise and democratic rule of long standing. The geographical location the country enjoys is also key, and its central proximity to the US is a feature that makes it an excellent destination for FDI. Another important aspect is the country’s participation in major trade agreements like DR-CAFTA and the Economic Partnership Agreement with the European Union (EPA), among others, which make us an investment destination that can take advantage of these agreements. The existence of an excellent road, port, and airport infrastructure network, the latter with eight international airports, is also important, as is our world-class telecommunications system. Diversification in target sectors of FDI is another factor that has contributed to the increase in investment flows. In 2000, four sectors, namely electricity, telecommunications, trade, and tourism, accounted for 82% of FDI. Just 13 years later, in 2013, the spectrum of sectors expanded, with additional areas including real estate, construction, and finance. The sectors that have great potential for future growth in foreign investment are mining, agriculture, energy, and tourism.

What has been the impact of the normalization of US monetary policy in the Dominican Republic?

Undoubtedly, the process of normalization of US monetary policy will influence an increase of interest rates internationally, affecting capital flows and changing the liquidity conditions that have existed in the international financial markets over the years. The Dominican Republic is no exception to this international reality. However, we understand that the country is better prepared to face any effect arising from this situation, given the early stage of development of our capital markets and strong fundamentals of our economy, as evidenced in 2013 with the first indications of the US Federal Reserve withdrawing its monetary stimulus. The behavior of the markets at that time showed that, internationally, the Dominican economy is linked to the group of emerging economies with sound macroeconomic fundamentals, as is the case for Colombia, Chile, Mexico, and Peru in Latin America. In addition, several studies in international organizations like the IMF and the Inter-American Development Bank (IDB) suggest that the effects of this normalization would be different in two groups of countries in Latin America. For example, countries that, in addition to having the US as their main trading partner, have an incipient development of their financial markets, among which are the Dominican Republic, tend to benefit more from the real effects of monetary normalization, given the highest economic growth in the US, which could be affected by the tightening of international financial conditions. However, the Central Bank remains aware of these events and reacts in time when the balance of risks points to possible deviations from its inflation target, and thus takes the necessary measures to ensure the maintenance of macroeconomic stability in our country.

“The Central Bank’s policies to encourage investment are aimed at ensuring macroeconomic stability.”

What is your evaluation of the level of assets and deposits of Dominican banks in 2014?

As of August 2014, the total assets of financial intermediation institutions totaled Ps1.14 billion, a nominal growth rate of 8.6% relative to the amount recorded on the same date the year before. If you compare this from August to December 2013, assets totaled Ps54.074 million, i.e. 5%. This growth is mainly explained by the behavior of the loan portfolio, which in August this year totaled Ps667.9 million, a variation of 12.5%. Significantly, of the total loans in the financial sector, commercial banks represented 86.9%. Indeed, the loan portfolio of multiple banks totaled Ps586.69 million in August 2014, a variation of 12.8%. Meanwhile, public deposits in the financial sector in August 2014 reached a total of Ps935.7 million, an annual increase of 10.4%, equivalent to Ps87.8 million. Domestic currency deposits grew faster compared to the same period of the previous year, at 12.9%, while foreign currency deposits increased by only 3.6%. In August 2014, the share of domestic currency deposits in total deposits in the financial system was 74.6%, reflecting a decline in the share of foreign currency deposits, which went from 27.1% to 25.4% during the period. An important element worth noting is the fact that during the period from August 2013 to August 2014, financial intermediaries decreased their exposure to credit risk by maintaining the downward trend in the non-performing loan (NPL) ratio, which went from 2.9% to 2.2%, driven by lower coefficients shown in commercial banks and savings and loans. In particular, multiple banking delinquency rates fell from 2.9% to 1.9% and provision coverage of NPLs increased from 117% to 164.3%. Overall, the Dominican financial system has adequate liquidity, profitability, and capital strengthening. The solvency ratio remained above the 10% minimum required, reaching 18.18% in July 2014, the last available figure, while the return on assets (ROA) and average equity (ROE) for August was 2.02% and 18.33%, respectively, in the same month. Commercial banks showed levels of 2.05% for ROA and an ROE of 21.45%. This behavior of the entities of the Dominican financial system is mainly due to the implementation of bylaws and regulations by the Monetary Board, in line with the Basel core principles and international best practices.

In the recently celebrated Invest in DR Summit, the Central Bank estimated that the national economy would grow between 5.5% and 6% in 2014, quadrupling Latin American growth. What are the main growth drivers?

During the January-June 2014 period, the performance of the Dominican economy as measured by GDP in real terms (reference year 2007), recorded an annual increase of 7.2%. This trend allows forecasting growth for the year 2014 at between 5.5% and 6%, higher than originally envisaged in the macroeconomic framework of a real GDP growth of 4.5%. The driving forces of economic growth expected for 2014 are agriculture, mining, construction, trade and hotels, and bars and restaurants, due to the dynamism exhibited since late last year. In the case of Latin America, consensus forecasts predict an average growth rate of 1.4% for 2014, a figure that has been revised downwards during the year due to decreases in the growth estimates in several of the largest economies the region, such as Mexico, Brazil, Chile, Argentina, and Venezuela. For the last two years changes in real GDP at end-2014 of -1.6% and -2.6%, respectively, are forecast, reducing the average growth in the region.

What are the main policies of the Central Bank in 2015?

The Central Bank’s policies to encourage investment are aimed at ensuring macroeconomic stability, which the country enjoys. In this sense, from January 2012, the Central Bank adopted an inflation targeting scheme as a transparent and modern way to develop monetary policy, consistent with the mandate of maintaining price stability established in the Constitution of the Republic and the Monetary and Financial Law 183-02. Under this scheme, the Central Bank will continue its pro-active and vigilant monetary policy of external and internal shocks that may affect its inflation target, maintaining proper coordination with fiscal policy, in order to promote certainty for economic operators and a climate favorable investment. Another important aspect is to ensure relative exchange rate stability under the managed floating exchange rate regime that the country possesses. For this, the Central Bank will continue to monitor fluctuations in the exchange rate, to ensure that the real exchange rate stays aligned with the macro fundamentals of the Dominican economy.

What is your general outlook for the economy of the Dominican Republic in 2015?

According to estimates of the macroeconomic framework, the Dominican economy would grow at around 5% in 2015, with an inflation rate that points to the center of the Central Bank’s target range of 4.0% ± 1%. This is accompanied by a relative stability of the exchange rate, since the strengthening of international reserves that are expected to hold a minimum of three months of imports of goods and services associated with larger flows of foreign exchange by the improved performance of the external sector. Indeed, in a preliminary way, the projections indicate that, by 2015, the current account deficit is expected to be around 4% of GDP, with future estimates trending downward in line with the historical average of 3.5%.