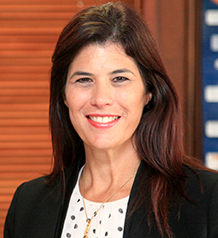 Where Are you going?

Natalia Abello Vives is the Former Minister of Transport for the Republic of Colombia. She earned a bachelor’s of law from Pontificia Javeriana, with further specializations in management, public service, business and company law, negotiation, and conflict management and resolution from Los Andes, Javeriana, and Externado universities. She completed studies at Harvard and Yale in leadership and management for lawyers, respectively. She has 22 years of experience in the public sector, where among other positions she served from 2012 to 2014 as General Secretary of the District of Barranquilla and on several occasions as its acting Mayor. She also served for 13 years as Secretary General of electricity transmission company Traselca.

Share on:
TBY talks to Natalia Abello Vives, Former Minister of Transport, on government investment plans, new upgrades to the national transport network, and integrating innovations in the transport sector.

How will the current economic context influence in the government’s investment plans for transport infrastructure?

We are working to continue with a program of new highways, the concessions of which are fully allocated and running. We also promote the development of a transport system based on what we call intelligent infrastructure, where we not only construct roads but we promote an efficient logistics system through intermodal connectivity and competitiveness, linking the private sector as the main actor. In this context, the Fourth Generation program is an alternative for the development of road infrastructure in the country, accelerated by ensuring the quality of roads and facilitating the country’s competitiveness.

What new developments will we see in the national transport network in the short term?

The planning and execution of major road infrastructure that the government has been promoting have reduced risks for investors and this has influenced the influx of foreign capital. Among the most notable developments are institutional strengthening through the creation of the Vice Ministry of Infrastructure, the National Infrastructure Agency, and the Funding Institution for National Development, which focuses on structuring projects. The PPP law was enacted in 2012, introducing improvements in the procurement regime. We have also sought to consolidate the national road network through increased connectivity between centers of production and consumption with the major cities, port areas, and borders that have shorter travel times and operating costs. This has enabled production and marketing of low-cost goods produced and consumed throughout the country, which has increased competitiveness and improved the quality of products. For this reason we are expanding the portfolio of infrastructure projects in all transport modes to improve conditions for the mobilization of cargo and passengers. In the National Development Plan 2015-2018, one of the crosscutting strategies was the construction of the PMTCT. This articulates the national logistics system and seeks to identify a portfolio of transport projects in the short, medium, and long term (2015-2030) with an intermodal approach that responds to the present and future needs of the economy. This project portfolio is established under an appropriate methodology, which identifies the projects required to meet the present and future demands of the road, river, rail, airport, and port networks. By December 2018, the country will have about 11,000km of national roads under concession. ANI had about 6,820km, 1,870km of which correspond to dual carriageways built through concession. We will continue with programs like Prosperity Corridors by Invias, and we will also structure a road-paving program that prioritizes those necessary sections for closing regional gaps. We will boost the development of the tertiary network through a joint effort with institutions, promoting the use of local labor. All these actions will stimulate the economy and generate employment both directly and indirectly. Therefore, all other structuring programs of projects advanced under this government enjoy a degree of maturity that establish not only an excellent distribution of risks in contracts but a guarantee of legal stability that allows us to advance with greater certainty in implementing them. The sectors with growth expectations, such as industry and infrastructure, will benefit from this first wave and thanks to these sectors, the economic slowdown will be orderly and gradual, and recovery will begin to strengthen in the 2H2016.

What measures does Colombia have in place to regulate the expansion of mobile applications offering private shuttle services?

First it is important to point out that we have a regulation that states that passenger transport is considered a public service. Therefore, you cannot use private transport to provide public passenger service. Secondly, the government sees technology platforms as a tool that duly empowered transport companies can use to improve service delivery in order to be more efficient and accessible to the user. In this context, we have been regulating the conditions to be met by technology to be used in public transport passenger platforms.