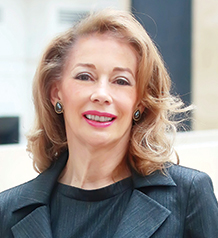 Doris Bradbury completed an M. Litt. at the University of Edinburgh in the UK and pursued PhD research at the University of London and Moscow State University. She has taught at the University of St. Andrews and published research on late 19th century Russian literature. She worked for 15 years for the Canadian government and for the Association of Universities and Colleges of Canada, where she headed the Central and Eastern Europe Unit and served as Executive Director of the Canada-Russia Economic Policy Program. In 2000, she was joined the Carter Center in Atlanta, where she served as an Associate Director. In 2006 she was appointed Executive Director of AmCham in Kazakhstan.

How is the Chamber supporting development of the business climate here in Kazakhstan?

AmCham was founded in 1999, although the American business community began meeting several years earlier. Since then, AmCham has become a truly international business association in which businesses from every part of the world, including Kazakhstan, work together on a broad variety of initiatives. It is sometimes assumed that we are an exclusively US business association or that we are a branch of the US government, but this is not the case. We represent the entire spectrum of the investor community, all sectors and all national affiliations. This is our strength. In recent years, advocacy to reform the business environment has become an AmCham priority, and we have developed a close relationship with the government of Kazakhstan for this purpose. Six years ago, we started meeting directly with the Deputy Prime Minister, providing recommendations on cross-cutting policy issues in Kazakhstan’s business environment. Then in 2013, Prime Minister Massimov suggested creating a council for AmCham and its members to meet monthly on issues of our choosing with cabinet ministers. The Prime Minister always attends and chairs these monthly meetings, and we are encouraged to speak out frankly on all issues. The Council to Improve the Investment Climate is composed of ten corporate leaders from among AmCham members and ten ministers and deputy ministers. Depending on the topic for the meeting, we can specify the presence of a minister responsible for this portfolio. For instance, the December Council session was devoted to the telecommunications industry, with the CEOs of Kazakhstan’s three leading foreign telecoms presenting their ideas about the future of telecommunications in Kazakhstan. The Chairman of Kazakhtelecom, along with ministers responsible for industry and technology, attended on the government side, and the Prime Minister spoke at length about the government telecommunications strategy in the year ahead. Prime Minister Massimov has been extremely supportive and we consider ourselves very fortunate to be able to speak directly to him each month. In June, AmCham presented a White Paper, Top Ten Barriers to Foreign Investment, to the Prime Minister, and this became an Action Plan for the Government. Beginning in July, AmCham has been regularly invited to attend Cabinet meetings to take part in discussions of the “Top Ten,” with ministers assigned to create Working Groups for each of the ten problem areas. This is a rare honor, and we are very grateful to Prime Minister Massimov for his attentiveness to business and to the AmCham business community.

Future economic growth relies on improving the business environment by changing or eliminating policies and regulations that discourage investment. What are the main challenges that international companies face in Kazakhstan?

AmCham started by focusing on the courts and judicial reform. Kazakhstan still has a way to go in creating a judicial system that can handle investor cases competently and equitably, although there has been improvement with a variety of judicial training programs. The Supreme Court is able to handle complex cases, but the lower courts are less reliable. This is a post-Soviet problem of course, one that afflicts all of the countries whose judicial systems were once Soviet. It will take time, as it requires a change in mentality. Judges still feel they should automatically side with the government in tax cases, for instance, and this is discouraging to investors. Investors need a stable environment with rules and regulations that do not change constantly. Taxes are constantly in flux, and companies must work hard to keep up with the latest changes. Government priorities also change, and despite much talk of economic diversification, this is not really happening. Visa and work permit regulations also need updating, so that companies can bring in senior foreign staff where local staff capacity is still not well developed.