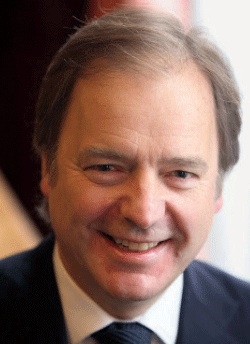 Hugo Swire was appointed Minister of State at the Foreign and Commonwealth Office on 4 September 2012. Besides his geographical responsibilities he also oversees public diplomacy and the GREAT campaign, and prosperity work, including the FCO’s relations with British business. Landmarks of his political career include his election as Conservative Member of Parliament for East Devon in June 2001. He subsequently served in David Cameron’s first Shadow Cabinet as the Shadow Secretary of State for Culture, Media and Sport between 2005 and 2007. He then became Minister of State for Northern Ireland in the coalition Government in May 2010. In 2011, Mr Swire was sworn in as a member of the Privy Council.

Share on:
TBY talks to HE Hugo Swire, Minister of State at the Foreign & Commonwealth Office, on initiatives to optimize bilateral trade and Mexico's appeal as a base for international companies.

Three years ago, the Rt. Hon. William Hague MP discussed the importance of re-launching British-Latin American ties on a modern footing during his Canning Lecture. What has been the progress in this area?

In the three years since the Foreign Secretary gave the Canning Lecture we have seen a complete reinvigoration of our relationships in Latin America. Not only have we had twenty visits to the region from UK Ministers so far this year (and 70 since this government came to office in 2010), but we have also opened a series of new Embassies and Consulates. We are working closely with all our Latin American partners to improve relationships, and have seen a steady growth in trade and investment. UK exports to Mexico grew 26% in the first half of 2013 compared to last year for example, and goods and services exports to Brazil are up £1.3 billion in the first half of 2013. UK firms have also won over sixty contracts worth over £100 million for the World Cup and Olympics being held in Brazil.

Mexico is Latin America’s second largest economy. How do you evaluate its importance for the UK’s overall relations with and strategy towards the region?

The relationship between Mexico and the UK is in excellent shape, and we consider Mexico an attractive business market, full of opportunities. By 2050 analysts actually predict its economy will be the fifth largest in the world with predictable and stable growth. I think it is also important that Ministers in both Governments have established genuine friendships and good working relationships from the President and Prime Minister down. Many international companies are already choosing Mexico as a base, which has created significant opportunities for smaller companies, particularly in the northern industrial zones. This, complemented by a well-educated workforce, has meant that Mexico is now moving up the value chain—away from the traditional maquiladoras (assembly plants) and textile industries into engineering, IT, research and development, and the creative industries. In recent years the maquiladoras have also focused on more sophisticated manufacturing operations, in line with the modernization of the Mexican economy.

The UK is Mexico’s fifth largest investor, and total bilateral trade in goods and services has increased by 23.4% since 2009. And we know there are opportunities for UK firms in more areas, including automotive and aerospace, retail, education, the environment, and energy.

Over the past five years Mexico has attracted an enormous amount of foreign direct investment from countries impressed by a friendly investment climate, competitive labor costs, a fully convertible currency, low taxation and duty free access to the US and Canada.

UK-Mexico trade is set to reach £4.2 billion by 2015. How are initiatives such as the founding of the UK-Mexico Chamber of Commerce and the UK Mexico Business Forum helping to expand these exchanges?

Lord Green, UK Minister of State for Trade and Investment, has visited Mexico twice in the last fifteen months with a very important objective: to increase the number of British companies that export to Mexico.

One of the best ways to do this is to enhance the support that is available, especially to companies setting up overseas for the first time so that those that are new to the market can get advice from other companies already active there. So at the end of 2012, we launched an initiative to do exactly that in 20 priority countries, including Mexico.

The British Business Centre is a program that by 2017 will provide expanded business-led support to UK SMEs in Mexico. Run by the British Chamber of Commerce, it will provide a range of services to UK SMEs and other UK companies, with the support of UKTI. It will give a lifeline to those who are unsure of their new market, with crucial advice for surviving and thriving.

The UK Mexico Business Forum is a small, high-level body consisting of CEOs or chairmen from the UK and Mexico. More strategic than the British Business Centre, it has been set up to identify both opportunities and obstacles for British and Mexican businesses, consider ways of encouraging trade in both directions and recommend actions for improvement to both governments.

Together these initiatives offer expanded and improved services for British companies in Mexico, and this will help our target of doubling bilateral trade to £4.2 billion by 2015. We will continue to look to boost the UK’s presence in Mexico by promoting the establishment and development of our companies in the Mexican economy.