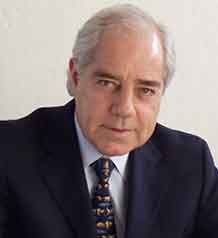 José Escalante de la Hidalga was born in 1953, and began his professional career in 1977 as Sales Representative, Sales Manager, and then Marketing Manager for the Veterinary and Agrochemicals Division at Merck Sharp & Dohme de Mexico. In 1983 he became Director of Marketing and Agricultural Sales in the Agrochemicals Division at Velsicol, and in 1988 became the Founding Partner, CEO, and President of the Administrative Board for Velsimex. He is also President of AMOCALI, A. C. (Campo Limpio).

Share on:
TBY talks to José Escalante, author of Sintiendo los Patrimonios de México, on the inspiration behind his book and some of his favorite attractions in Mexico.

What was the motivation to write a book about Mexico’s UNESCO World Heritage sites?

Mexico has many beautiful places to offer to visitors, many of them UNESCO World Heritage sites. My book was launched in November 2015. I started my personal trip by enjoying the magic of the celebrations of the Day of the Dead in November 2014 and the Monarch butterflies migration, mainly because these two events happen at a specific time of the year. I later drew up a plan to visit the rest of the geographical points in order to set up the tone of the book, which is written in a similar way to which we traveled: we follow a geographic trip from area to area. This way, the reader can feel as if they were traveling along. When traveling, I enjoyed many surprises and pleasures. You can read about these places, but I recommend visiting them. They are unique experiences in life; touching the whales, feeling them close enough to realize of their magnitude, seeing eagle nests close enough to see their babies. It is also important to highlight the investment made by UNESCO in these sites in order to train locals to become, for example, guides and technicians. They invest in protecting the areas and make them sustainable.

What is your favorite UNESCO World Heritage site from Mexico?

It is extremely difficult to choose one because we have the whales and butterflies experiences that have a natural component. In the book, for example, I describe all the particularities of the Monarch butterflies; how they exercise prior to their migration, how they train, how many kilometers they fly and its Matusalem generation. It is wonderful to get to know how they orientate themselves despite their short life. The wonders of nature are incredible. I mention the arabesque fountains and architecture of Chiapas de Corzo, an amazing city. I talk about the Parachicos, traditional dancers from Chiapas who dance on the streets of the town during the Great Feast festivity, which takes place from January 15 to 23 every year. The festivity takes place in honor of the local patron saints Our Lord of Esquipulas, Saint Anthony Abbot, and Saint Sebastian. It is claimed locally, as are many of the Catholic festivals in Latin America, to have its roots in the much older indigenous culture. Therefore, it has developed into a hybrid of old indigenous culture and newer Catholic and Spanish cultures. The church where the festival concludes is home to an old tree, which is claimed locally to predate the church, suggesting that this site was used for ceremonies before the arrival of Catholicism. The Historic Center of Oaxaca and the Archaeological Site of Monte Albán, the first urban center in America, are other great heritage sites. This is in fact one of the strongest points of all Mexico’s UNESCO World Heritage sites: they hide plenty of history and anecdotes of how they come to be built and kept over the time. We have as many as 10 cities that have been declared UNESCO World Heritage sites, being the country with the third highest number of cities in the UNESCO list. The history of Puebla is also interesting, for the city was developed when the Mexican crown wanted to develop a kind of small town (Puebla) between Mexico City and Veracruz. The real name of the city was going to be Ángeles but the people insisted on maintaining the Puebla order of the Queen as part of the name. San Miguel de Allende enjoys a unique architectonical style made of the combination of the traditional local style with a sub-gothic style. On top of that, Mexico offers a unique level of service to its guests, and we are an extremely friendly country; service here is marvelous and people always want to make you feel unique. That is another reason why Mexico has a unique potential within the tourism industry and we need to work together to meet this potential.