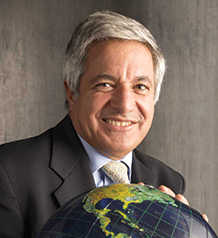 Jean-Claude Bessudo studied at the Solvay Mathematics Institute, Brussels, Belgium and later at the High Company Management Program in the Los Andes University in Bogotá. After starting out as the Personal Board Assistant at Aviatur, he moved up to his current role as Director General and President of the Aviatur Group and branches. He has also held leadership positions at the Colombian Travel & Tourism Agencies Association, the French & Colombian Chamber of Commerce & Industry, as President, and at the International Congress & Convention Association (ICCA), as Vice-President.

Share on:
TBY talks to Jean-Claude Bessudo, President of Aviatur, on developing the national tourism sector, the benefits of business travel, and the importance of domestic tourism.

How would you rate Colombia’s efforts to improve its international image?

Colombia is improving its image, but we could always do better, although that would require peace sooner rather than later. Violence naturally breeds instability, although a larger budget has been allocated for the promotion of the country, which is significant.

What is the state of the tourism industry today?

We have not experienced a touristic boom in the country as yet. The government’s goal was to receive four million visitors last year. And although 3.8 million arrived, the term ‘visitor’ means someone who crossed the border, rather than a tourist who spent a significant amount of time in the country. The figure for tourists last year was just 1.75 million, which is the same as in 1982. On the other hand, there are many corporate visitors. This is the inverse of what was happening in 1982. The people who want to discover the country might be mostly from Central and South America. We do have some backpackers and some traveling on into the Amazon.

Has Aviatur played an important role in taking the business travel figure to 85%?

While that is not our area of operations, business tourism has benefited from the conventions and conferences held in Colombia. For example, in 2013 we organized the Cumbre de las Américas in Cartagena. Attendance was at around 4,500 people, with many the heads of states in attendance. The traffic that goes through travel agencies, however, is primarily people that want to discover different parts of the country. Aviatur has played an important role in the rehabilitation and opening of quality services in a number of national parks, namely Los Nevados Gorgona, Tayrona, Amacayacu, and Otún Quimbaya.

How would you evaluate the domestic tourism market?

It is important for the number of tourists visiting Colombia to exceed those leave the country. For that, we need peace. There is an imbalance between the two figures. Right now, we are striving to regain this balance. We have a department with 10 people attending to fairs and exhibitions abroad in conjunction with ProExport Colombia, and we have promotional literature in Swedish, Hebrew, German, Chinese, Japanese, and Russian, among others. That said, we will only see the results of this promotion once peace has been achieved, similar to what happened with Vietnam, Myanmar, Cambodia, or Lebanon.

How has Aviatur maintained such a high market share in Colombia?

I believe that a company is as bad as its worst employee and as excellent as its best collaborator. My job is to understand why mistakes happen and make sure that they aren’t repeated. That’s the official answer, and is unchanging. Sometimes the solution to a specific problem has been to create a new company or a specialized department; sometimes it’s been achieved through technology or better informing our staff, or creating our own training center. For each situation, we have tried to find the right solution. The companies that survive are not the biggest, the best, the most intelligent, the richest, or the most modern; they are those capable of adapting to changes. That is my job, and also to maintain an equilibrium inside the company and between the company and the market place, like the government and customers, staff, shareholders, suppliers, and so on. That’s the secret.

How are you continuing to expand your presence abroad?

We have a strong niche in the market, which we capitalize on through with technology, and we administrate other travel agencies. Our competitors are colleagues, and this is important activity for us. This has grown a lot. We face a challenge to improve our share of the market in ecommerce. Aviatur has the lowest fares and excellent technology. We have to convert about 16% of our customers in order to have a strong showing in ecommerce and online transactions. Our online business is increasing exponentially, which makes it a key component of our job. Customers can buy tickets from Aviatur.com from anywhere in the world, and this will remain the focus over the coming years.